Advertisement
By Paul Owere
More by this Author

It was a relationship that on many occassions stood on the edge of a cliff with no signs of redemption.

However, on New Year’s day Harmonize's followers on Instgram woke up to a surprise end-of-year message to his former WCB boss and mentor Diamond Platnumz.

Feom his base in Accra, Ghana, Harmonize opened up on how Diamond Platnumz transformed his life.

“Speaking this from the bottom of my heart, I love you, bro. It is a new year, 2021. Thank you for changing my life. You alone saw the Diamond in the dirt amidst great darkness. Today Africa, especially East Africa is proud of me,” he wrote.

“This love is forever my brother. Everything I have done it's just to make you proud. Don't get me wrong, read between the lines; you know what I am talking about. You’re the legend, stay cool. #Kondeboy and all Konde Gang team we love you. Happy new one. Chibu (Dangote) Diamond Platnumz - big brother.” 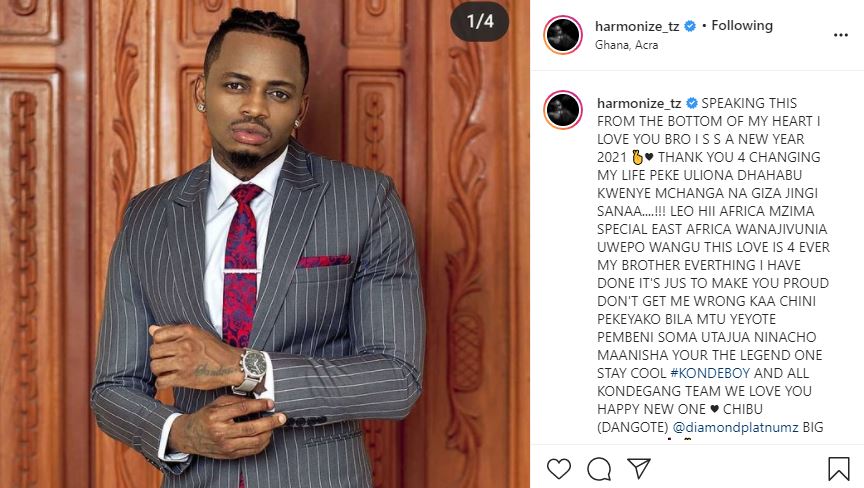 The surprise post came hot in the heels of reports of warming ties between the two after almost a year of alleged hostilities following Harmonize’s decision to want out of his contract with WCB in 2018. News of the development first tore off the cracks and blossomed in March 2020 after Platnumz posted a tracklist to Harmonize’s 18-track album, Afro East, on his Instagram account.

Platnumz is said to have publicly patted his protégé's back after Harmonize reportedly settled a Sh500 million bill with WCB, officially triggering a release clause.

Strengthening trade and investment, tourism and unconditional repatriation of Ethiopian jailed for defying immigration laws are among issues...

How Dr Mvungi’s killers were nabbed, sentenced to death (2)

While Dr Sengondo Mvungi was being taken to Tumbi Hospital after he was attacked by robbers, the Police Force was already monitoring the incident...

Man narrowly survives death after chopping off his manhood

Why Zanzibar is now the 4th largest East Africa airport