Early this week, Chinese Ambassador to Tanzania H.E. Wang Ke gave an interview to The Citizen on Chinese State Councilor and Foreign Minister Wang Yi’s recent visit to Tanzania. Here are the full text of the interview.

Your Excellency, could you brief us on the highlights and major outcomes of the Chinese State Councilor and Foreign Minister Wang Yi’s visit to Tanzania earlier this month?

During his visit to Tanzania, H.E. Wang Yi met with President John Pombe Magufuli, held bilateral talks with Foreign Minister Palamagamba Kabudi and jointly met the press with the latter.

First, China-Tanzania traditional friendship is a precious treasure shared by both sides and the people of China and Africa. It must be cherished, passed on from generation to generation and carried forward.

Second, both sides have agreed to make full use of our shared vision and goals in the construction of country, political parties and armed forces, in a bid to further enhance communications at all levels and deepen exchanges of experience on governance.

Third, both sides have agreed to strengthen practical cooperation under the Belt and Road, support more Chinese enterprises to invest in Tanzania and expand import of Tanzanian high-quality products.

Fourth, both sides have agreed to strengthen coordination in inter-national affairs, jointly support multilateralism, oppose foreign interference, safeguard international fairness and justice, and build a strong fortress to safeguard each other’s core interests and the common interests of developing countries.

Attending the inauguration ceremony of Chato District Vocational Training Centre, H.E. Wang Yi, on behalf of the Chinese Government, announced the donation of RMB 1 million yuan (around US$154,000) to support the Training Centre in procurement of fishing materials and equipment, which was highly praised by the Tanzanian side.

China-Tanzania relations have been the focus of media attention recently. On 15th December 2020, President Xi Jinping had a historic telephone conversation with his Tanzanian counterpart John Pombe Magufuli. Lately, Chinese State Councilor and Foreign Minister Wang Yi paid an official friendly visit to Tanzania. Why did State Councilor Wang Yi choose Tanzania as one stop of his first overseas visit in 2021? What’s the significance of this visit to the development of China-Tanzania relations?

Chinese Foreign Minister’s vis-it to Africa at the beginning of a year has been a fine tradition for 31 years, and has become a major feature of China’s diplomacy. In particular, against the backdrop of the COVID-19 pandemic, State Councilor and Foreign Minister Wang Yi has upheld this tradition and taken concrete actions to demonstrate the great importance China attaches to Africa and the unbreakable brotherly friendship between China and Africa.

The development of China’s friendly relations with Tanzania plays an important role in China’s diplomacy. China-Tanzania relations play an exemplary and leading role in China-Africa relations. In March 2013, President Xi Jinping visited Tanzania on his first overseas visit after taking office, where he put forward the policy of sincerity, real results, affinity and good faith.

Tanzania is the place where China initiated its policy toward Africa in the new era. Last October, after President John Pombe Magufuli was re-elected, President Xi Jinping was the first head of state outside Africa to send a congratulatory message to him.

Last December, the two heads of state held a historic telephone conversation, charting the course for the future development of bilateral relations. State Councilor and Foreign Minister Wang Yi’s visit to Tanzania at this important juncture aims to help the two sides build more consensus, implement the outcomes of the phone talk between the two heads of state, and strive for early and more tangible results.

His visit also aims at further expressing China’s congratulations and support to President John Pombe Magufuli on his re-election and the establishment of the new Tanzanian government, as well as China’s firm determination to strengthen the bilateral friendly relations.

State Councilor Wang Yi’s visit was fruitful and played an important role in promoting the sustained development and upgrade of China-Tanzania comprehensive partnership. This visit has deepened the consensus for consolidating the traditional friendship between China and Tanzania. Both sides spoke highly of the historical and present day significance of China-Tanzania friendship to the development of both countries and China-Africa solidarity, stressing that China-Tanzania friendship is a precious treasure created by the older-generation leaders of the two countries and should be inherited from generation to generation. State Councilor Wang Yi has said on several occasions that China and Tanzania are the best friends in the world. His heartfelt and sincere remarks were warmly responded by the Tanzanian side. 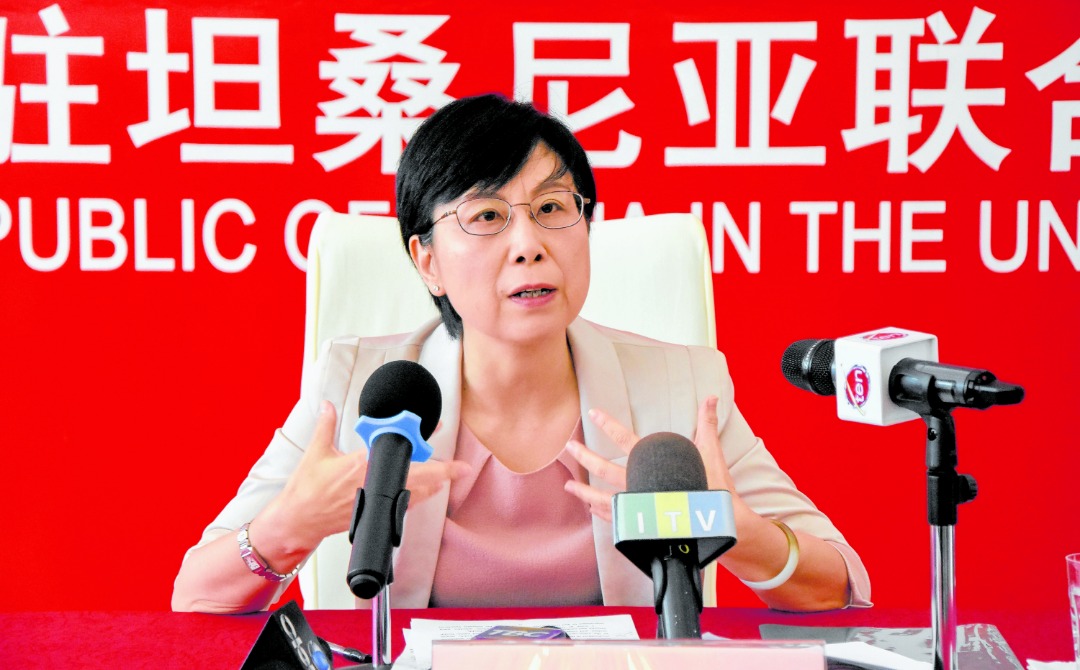 This visit provides an opportunity to form synergy between China’s and Tanzania’s development strategies. Both countries have entered a new stage of development and embarked on a new historic journey.

The two sides agreed to better align China’s 14th Five Year Plan with CCM’s 2020-2025 Election Manifesto, consolidate and expand the strategic opportunities facing the development of China-Tanzania ties, properly handle problems and challenges in the course of cooperation and development, and provide greater impetus for Tanzania to realize its strategic goal of independent development.

During the visit, the Tanzanian side has put forward some specific appeals to China, such as to expand the imports of agricultural products from Tanzania, to forgive some debts that Tanzania owes to China, and to open direct flights between Tanzania and China. How will China respond to these appeals?

Firstly, we will support the competent authorities of both sides to accelerate negotiations on inspection and quarantine requirements regarding the access of Tanzanian high-quality agricultural products to the Chinese market. China has opened its market to Tanzanian tobacco, cassava flour and soy-bean, and will further grant market access for Tanzanian sunflower meal, honey, avocado and other agricultural products.

Secondly, we will actively use CIIE and other platforms to introduce Tanzanian high quality products and tourist resources to Chinese consumers.

Thirdly, we will encourage more Chinese enterprises to invest in Tanzanian agro and mineral processing industries, and develop Tanzania as a bridgehead for Chinese companies to enter the eastern and southern African markets.

Fourthly, we will encourage cooperation on e-commerce, mobile payment and other new areas, and pursue creative ways to boost bilateral trade.China attached great importance to the challenges caused by COV-ID-19 to African countries and is actively implementing the G20 Debt Service Suspension Initiative (DSSI). Thanks to China’s effort, G20 has extended the period of DSSI to 30th June 2021.

At present, China ranks the first among G20 members who have carried out DSSI by suspending US$ 1,353 million of debt service payments from 23 countries, including US$ 817 million from 15 African countries. China takes in account Tanzania’s debt fragility issue resulted by COVID-19 seriously. The two sides have successfully signed the DSSI agreement for 2020, and currently are discussing the debt service suspension by June 2021 in an active manner.

Air Tanzania is to launch direct flights between Tanzania and China, which is a big event in the history of China-Tanzania relations. It will facilitate personal exchanges, and greatly advance the communication and mutual understanding between our two countries and two peoples.

We hope this flight route could be opened as early as possible, forging a strong bond of friendship among our peoples, and further promote bilateral cooperation in the fields such as economy and trade, culture and tourism in the future.