Advertisement
By Bernard James
More by this Author

Dar es Salaam. While Dr Sengondo Mvungi was being taken to Tumbi Hospital after he was attacked by robbers, the Police Force was already monitoring the incident of armed robbery at his home.

Without hesitation, officers from Kimara Police Station went to the scene of crime where they found the kitchen door shattered with blood on it. The officers began their work by preparing a sketch of the scene.

The next day the then Dar es Salaam Special Zone Police Commander, Suleiman Kova ordered a special task force to follow up on the incident in which Sh2 million, one laptop, four phones and one pistol were stolen.

The search for the killers began with the task force leader contacting his confidants. The first contact resulted in the arrest of the first suspect only identified as Hamad in Mwananyamala on November 6, 2013.

However, he denied involvement in the incident but named Matonya Msigwa (the first accused) and his colleague Chibago as among those involved in the crime.

While in police custody, Hamad had set up an appointment to meet the suspects the next day. He was ordered by the officers to call and ask the men to meet in Kinondoni Biafra that day at 8:30 pm.

Everything went according to plan. Matonya and Chibago responded to the call and arrived at the scene. It was not long before they found themselves in the hands of the police.

During cross-examination, Matonya confessed to have participated in the robbery and that the pistol they stolen belonged was with a certain Ngosha (sixth accused). He told police that he had already planned to meet Ngosha the next day in Vingunguti.

At 11:30 pm police officers left with Matonya to Oysterbay Police Station. While at the station, Matonya's phone rang. Paul (the third accused) was the one calling. Officers at that point ordered Matonya to put the phone loud speaker and ask his collegue to meet him the next morning.

At 2pm, Paul called Matonya again and told him that he was going to Vingunguti together with Mianda (the second accused) at 9am.

The next day at 9 am, a special squad had already arrived in Vingunguti with Matonya and Chibago. At 10:30, Paul and Mihanda also arrived. They too fell into the hands of the police.

The search continued. All four suspects were taken to Vingunguti Police Station for questioning. When Paul was interrogated, Matonya wanted him to tell the truth about everything that had happened because they had already explained everything the day they were arrested.

At 11:15 a.m. while the interrogation was going on, Paul's phone rang again. This time it was from a man only identified as Masai. Paul told the police that the caller was their accomplice in the crime and that he was at Tazara coming to meet him in Vingunguti. 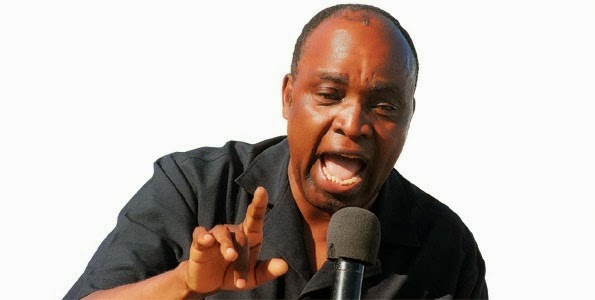 The officers left with the four suspects to Vingunguti bus station and set a trap. At the station, Masai (fourth accused) got off the daladala with another man named Hamisi Juma King’ungu (fifth accused). All were arrested and taken to Vingunguti Police Station.

During the interrogation, Kang’ungu admitted that he was the one who took Dr Mvungi's laptop and sold it to a man named Chief for Sh200,000 in Vingunguti.

Bizarrely, ‘Chief’ was never arrested, neither was the laptop was ever found by the time the ruling of and sentencing was made.

When pressed to tell where the pistol was, Kang’ungu replied that it was in the hands of a man named Ngosha (the sixth accused).

The officers with the help of Kang’ungu began the search for Ngosha via his mobile phone without success and decided to return to Oysterbay Police Station. That time was at 1:30 pm, November 7, 2013.

They arrived at the Oysterbay Police station at 5pm and informed the Chief of Criminal Investigation (RCO) of their findings and handed over all seven suspects for further questioning.

Ngosha had remained elusive and efforts to arrest him did not bear any fruits, nothing seemed to add up regarding his whereabouts. He remained at large.

On November 12, 2013, the Chief of the Anti-Robbery Squad at the Central Police Station received a call from his confidant at 5:30 pm informing him that one of the people involved in the murder of Dr Mvungu was in Jangwani, Kariakoo watching Young Africans FC training session at Kaunda Stadium.

The officer accompanied others went to the area with their informant who showed them where Ngosha was standing and the clothes he was wearing to facilitate capture. They approached him without him feeling wanted and arrested.

He confessed to have committed the crime and promised to cooperate by showing the weapon he stole on the day of the incident.

At 6:30 pm, the officers went to Ngosha’s residence in Kiwalani Migombani to conduct a search. When they arrived, they called Ali Mlekwa, the Landlord where the suspect lived to witness a search of the suspect's room.

They also called the chairman of the local government, Mzee Abdallah Ally and his fellow tenant, Emmanuel Mwakipusa to witness the search. With their photographer recording the entire incident, police searched the suspect's residence as scheduled.

Before the search began, police informed Ngosha that the intention was to search for the weapon they were looking for. However, before the search could begin, Ngosha admitted that he illegally possessed a pistol.

He showed them where he had hidden the weapon, which was in a plastic bag hidden under a brick in the corner of the house. When the bag was opened, a black Airweight Revolver pistol was found.

It was later confirmed in court that the pistol was the one stolen from the home of the late Dr Mvungi on the day he was attacked and killed.

The search continued and police recovered 21 bullets and five bags of dynamite. After the operation the search warrant was signed by all before leaving with the suspect to Msimbazi Police Station.

At that point, a detective from Oysterbay Police Station was called and handed over the suspect and all the exhibits for the next step.

The first accused in the case, Matonya, who runs a cattle slaughtering business in the Gongolamboto area, said he and six colleagues were arrested by police while drinking on November 6, 2013 at 11pm but were not told the reasons for their arrest.

He said they were taken to Kijitonyama Police Station where he was given a signature sheet and when he refused he was hit with a club on his knees, legs and a bottle inserted in the anus. He said that given the nature of the torture, he was forced to sign the papers.

Another accused Juma Kang’ungu, who owns a shoe business in the Buguruni ,claimed he was arrested while continuing his daily routine on suspicion of drug dealing.

After hearing the case against the six suspects, on September 17,2020, Judge Seif Kulita was satisfied that the prosecution had proved the guilt against all the accused except the fifth accused who was acquitted for lack of evidence against him.

"The accused was arrested by the police simply because he was seen getting off a bus in Vingunguti and he was a Maasai who was being awaited by the police. Unlike the other five accused, the police did not have any prior information about the man (Kang’ungu) before he was arrested, ”said Judge Kulita when he handed down the verdict that released Kang’ungu while the others  were sentenced to death.

What next for Tanzania maize after Kenya ban?

The government yesterday said it hasn’t received official communication from Kenya on the decision to ban maize importation to the East African...

Australian activist Zara Kay, who was being investigated in Tanzania over immigration issues, arrived in Australia with the immigration...

Role of women in extractive sector