Advertisement
By Habel Chidawali
More by this Author

Dodoma. Passengers yesterday recounted the moment before a train accident which killed three people and injured 66 others in Dodoma Region.

The accident, which involved six railway wagons, occurred on Saturday evening at an area between Kigwe and Bahi stations some 508 kilometres from Dar es Salaam and 58km from Dodoma city.

Residents said it is the second accident in the area where the first occurred in 1998. Also, it is the fourth passenger train accident in Dodoma Region in a span of 19 years. The crashed train had about 720 passengers, according to a statement signed by Tanzania Railway Corporation (TRC) head of public relations unit Ms Jamila Mbarouk.

The train had ten passenger wagons and two freight wagons, she said.

Passengers who spoke to The Citizen narrated the situation before the accident, with some disputing the number of the dead from the accident.

Ms Neema Ntibalema, 32 - who was travelling on the train in the second wagon from the engine - said when the train crashed, she was talking on the phone and suddenly heard screams from her fellow passengers.

“When I was on the phone, I heard a bang - and our wagon crashed into the ground,” she said.

She said most of the people who were taken to hospital for treatment were in shock from the loud bang when the wagons crashed.

She congratulated the Police Force for arriving at the scene in time to control the situation, including assisting the survivors of the crash.

However, she urged the TRC management to do their best to inspect the route, especially during the rainy season before allowing trains to travel.

Passenger Allen Mtolela, who was travelling from Dar es Salaam to Kigoma in wagon number seven, said he did not notice anything other than a shake and sudden stop as he heard a loud bang from in front of their wagon.

“Our wagon was number seven from the locomotive, and it was the first to stop. For us, what happened to other wagons was most scaring,” said Mr Mtolela.

The Bahi Village chairman, Mr Makulu Sifael Mbata, said the area wasthe scene of an accident in 1998 during the El-nino rains when four freight train wagons went off the rail and overturned.

He said the area is regularly flooded during the rainy season - and doubts if experts conduct regular inspections of the railway line for safety.

“I believe if they had a system in place to inspect the railway system, this accident could have been avoided because it had rained throughout the previous night - and the train overturned in the evening,” he said.

The civic leader urged experts to do more research, as the accident may have been contributed to partly by the ongoing construction of the modern SGR railway system. The construction may possibly have blocked rainwater water drainage channels. 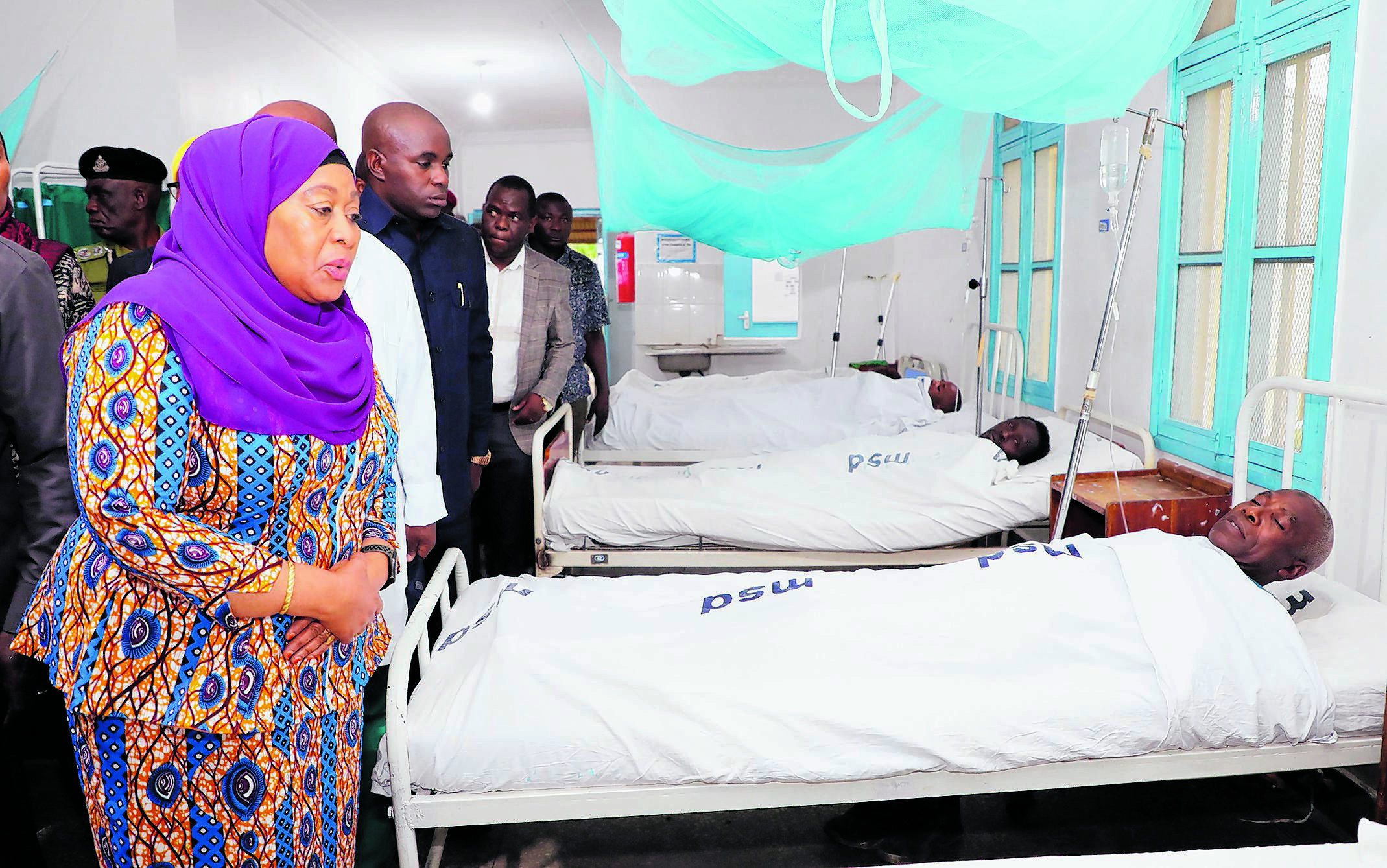 Vice President Samia Suluhu Hassan visits Dodoma Regional Referral Hospital to console survivors of Saturday evening’s train crash which left three people dead and at least 66 others injured. The locomotive and several wagons were derailed in the accident involving the train that was travelling from Dar es Salaam to Kigoma. PHOTO | VPO

The accident happened in a flat area with a clay soil, a few kilometres before reaching Bahi station. Rain water was still flowing over the railway lines, and some parts of the railway walls had clearly been washed away.

Rescue work was ongoing in the area which is partly wetlands and clay soils.

In the morning following the accident, the Vice President of the Union government, Ms Samia Suluhu Hassan, visited the survivors of the train accident at the Dodoma Referral Hospital where she directed the regional authorities to ensure that the survivors are given all the necessary support to enable them to recover from their injuries and go home as soon as it is humanly possible.

She made the statement after touring all the wards of the hospital in which the injured were admitted. Talking to them, the vice president said she was satisfied with their condition and the care they were receiving from the hospital staff.

“I urge the regional authorities, the ministry of Health and the Railways Corporation in particular, to work closely together to ensure that these patients receive all the necessary medical products and services - and when it is decided that they can be released, help them to get to their home safely,” she said.

Commenting on the condition of the injured, she said they were doing well except for two who had undergone surgery in their legs and arms. One of them was complaining of a headache - but doctors said there was no injury to his head!

The Dodoma Regional Commissioner, Dr Binilith Mahenge, said the bodies of the three women and a female child, were recovered from one wagon and the injured had been taken to Dodoma Referral Hospital where they were hospitalized.

For his part, the Dodoma Regional Police Commander, Giles Muroto, said security at the scene of the accident was heightened as he had deployed “enough troops” to ensure that there was no breach of any kind.

Other accidents in Dodoma

An accident on June 24, 2002 between Igandu and Msagali stations in Dodoma Region killed more than 250 people, mostly members of the Seventh Day Adventist church who were travelling from the church’s women conference in Morogoro.

On March 29, 2009, there was an accident in the Msagali area involving a passenger train and a freight train, which killed seven people.

On June 17, 2019, an accident occurred near Dodoma station after a passenger train collided with a road truck, injuring 29 people.

This latest accident involved a passenger train travelling from Dar es Salaam to Kigoma after its engine and six wagons were derailed.

Focus on 10 key issues as Budget debate winds up

Expectations are high that the government will address at least ten issues that defined the deliberations during the past several days.

In over a year and a half, 136 investment projects worth over $1.4 billion have been started Zanzibar.

Fate of 19 MPs in Speaker’s hands after court decision