Advertisement
By Rosemary Mirondo
More by this Author

A search by The Citizen on the said sections of the law revealed that the Competition Rules of 2018 provide Merger Notification Requirements by stating that any person who intends to acquire, control or to be acquired or controlled through a merger shall notify the Commission of that intended merger by filing a notification under section 11(2) of the Fair Competition Act (the “Act). 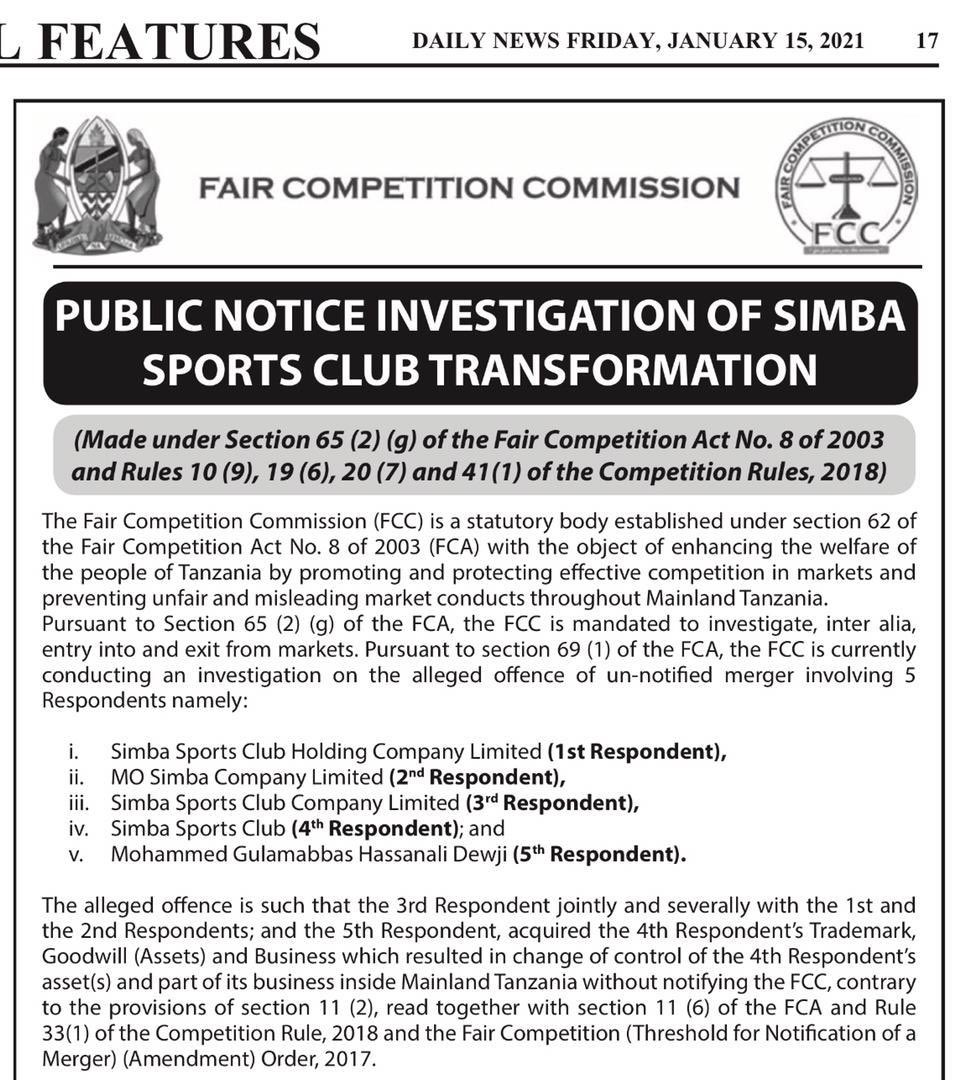 The Fair Competition (Threshold for Notification of Merger) Amendment Order of 2017 provides that the calculation of the threshold shall be based on the combined market value of the assets or turnover of the merging firms.

The parties to a merger are prohibited from implementing that merger until it has been approved, with or without conditions, by the Commission under the Act.

The FCC director general John Mduma told The Citizen that the public notice was part of investigations where they have invited stakeholders to submit their evidence either in writing or verbally.

“According to the law, once they submit their evidences within 21 days of the first day of publication of the notice, they date will be set for hearing,” he said.

He clarified that the hearing will determine the better decision to be taken over the issue.

For his part, Simba Sports Club Holding Company Lawyer, Mr Mhina Mhina confirmed to have received the public notice; however he declined to give further comments.

Simba Sports Club chief executive officer Barbara Gonzalez did not pick her gadget; instead she sent a test message saying she was attending a meeting.

January 6, this year, FCC issued provisional findings against the respondents to the said effect.

The respondent’s failure to notify FCC on the alleged merger, denied the latter with a statutory opportunity to carry out an ex-ante assessment of compliance as stipulated by section 65(2) (b) of the FCC Act when read together with section 11(1) of the FCA and part (v) of the competition rules, 2018.

On the basis of the just mentioned sections hereinabove and pursuant to section 62(4) of the FCA, the FCC has revoked its inherent powers to apply the provisions of part (v) of the competition rules, 2018 and conducted an ex-post assessment of the alleged un-notified merger occasioned by all the respondents.

In view of the public notice, DG Mduma said petitioners who have reason to believe that the alleged un-notified merger has affected or is likely to affect the persons material interest , is invited by FCC to file his or her written submission.